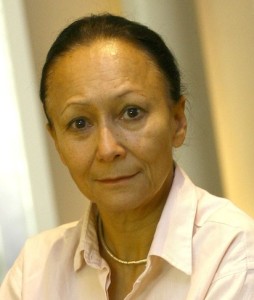 Shirin Akiner (1942-2019) came to the School of Slavonic and East European Studies of London University in 1965 as one of several ‘mature’ students as they were quaintly known at that time. As I was only in my second year of teaching and more or less the same age as these students I became friendly with several of them. Shirin was a brilliant student, recently widowed with a small child, Metin, after her husband had been killed in a car crash.

She was born to a Pakistani diplomat and Welsh mother, but brought up in a British school and spoke and wrote impeccable English. I got to know Shirin quite early on, as we shared an interest in classical music, although this is a serious understatement in her case, as she had studied the fiddle in Moscow and Amsterdam under the outstanding Soviet violinist David Oistrakh; I believe that after the tragedy of her husband’s death she never played the violin again. She remarried in the 1970s a scholarly businessman, David Mitchell, and moved from Willesden to Chelsea, and became known in non-academic life as Shirin Akiner Mitchell.

I am sure that it was I who aroused her interest in Belarus in the late 1960sa~ and introduced her to the Francis Skaryna Library and Fr Alexander. With the latter’s help she wrote an article, ‘Contemporary Young Byelorussian Poets (1967-1975)’, published in the Journal of Byelorussian Studies (hereafter JBS), III, 4 (1975), pp. 342-53, which was subsequently taken up by the Belarusians of eastern Poland who produced a Polish-language booklet from this article.Earlier, inspired no doubt by the excellent piece by Fr Nadson in collaboration with G.M. Meredith-Owens, a Professor in the Department of Islamic Studies, University of Toronto and  well-known specialist in Persian miniatures, ‘The Byelorussian Tartars and Their Writings’, JBS, II, 2 (1969), pp. 141-76, she also wrote an article on a cognate subject: ‘The Vocabulary of a Byelorussian K’it’ab in the British Museum’, JBS, III, 1 (1973), which later was expanded and revised, becoming a first-class book published by a prestigious German publisher: The Religious Language of the Belarusian Tatar Kitab, Harrassowitz, Wiesbaden, 2009.  On a lighter note, when occasionally we were invited to lunch with Fr Alexander who was an excellent cook in addition to his many other achievements, I would bring a bottle of wine whilst she, more sensibly, contributed some excellent coffee.

Always interested in Near and Central Asia, after an excellent degree in Russian with subsidiary Turkish, Shirin turned mainly to study of Central Asia, becoming a Research Associate at London University’s School of Oriental and African Studies, where she had mainly faithful postgraduates, and also an Associate Fellow of the Royal Institute of International Affairs.

Despite a glittering career in this field of study, she was loyal to her links with Belarus and Belarusians who, in turn, valued her work. For instance, in 1983 at the International Congress of Slavists in Kyiv, the Belarusian delegation insisted on my bringing her to meet them. In London, she regularly attended various launches, celebrations and other events. In fact, the last time I saw Shirin and her husband was at an exhibition of Belarusian art less than a year ago. She will sorely be missed by her son and husband, and by many scholars around the world, as well as by the Belarusian community in London that she supported so well.