Conference ‘Kastus Kalinoŭski and the Nation-building Process in Belarus’: Invitation and Programme 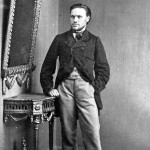 Association of Belarusians in Great Britain and Anglo-Belarusian Society have much pleasure in inviting to attend Conference ‘Kastus Kalinoŭski and the Nation-building Process in Belarus’ in London on 27-29 March 2014.

The event will feature over fifteen speakers and moderators from Belarus, United Kingdom, Poland and Lithuania.

The main sessions of the conference will be held on premises of University College London.

Most of the papers will be in Belarusian with summaries delivered in English.

This entry was posted in ABS and tagged abs, conference, kalinouski, london, zbvb. Bookmark the permalink.