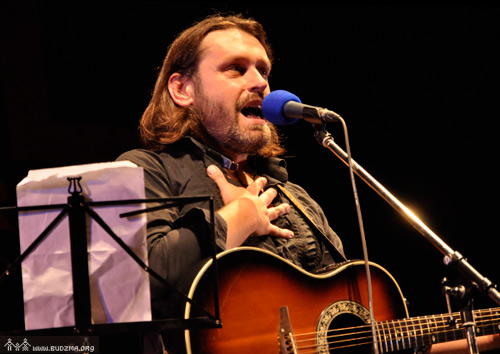 We just learned that unfortunately Zmicier’s visa application had been refused.  Although he kindly accepted our invitation, to our regret, he will not be able to meet with us tomorrow. Zmicier explained to us that the official reason was that the visa officer was not sure that he would return to Belarus.

Instead of our meeting with Zmicier we will have a film screening, in addition to the previously announced talk of Simon Lewis. We will propose several original Belarusian films and the one which receives most of the votes will be screened.

Anglo-Belarusian Society invites its members and friends on the first day of summer to the Belarusian House in London.

Concert of a famous Belarusian singer Zmicier Vaitsiushkievich will follow a talk of a Cambrdidge University researcher Simon Lewis.

The program of the day is as follows.

3:15  “Memory at War in Belarus: Official Myths and Cultural Resistance”,  Simon Lewis, the University of Cambridge.

Suggested donation to cover expenses of the organisers: 8 GBP (members of the Anglo-Belarusian Society), 10 GBP (non-members).

The guests are encouraged to bring their own wine and beer (but no spirits).

This entry was posted in ABS and tagged abs, Wajciushkewich. Bookmark the permalink.