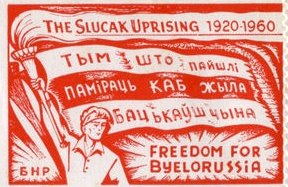 The Association of Belarusians in Great Britain in cooperation with the Anglo-Belarusian Society will mark the 92nd anniversary of the Slucak Armed Campaign of 1920 in defence of the Belarusian Democratic Republic.

The event will start on Saturday, 24 November 2012 at 2 PM, at the Belarusian House, 52 Penn Road, London, N7 9RE (Caledonian Road Station on the Piccadilly Line).

The event will begin with a prayer of Fr Alexander and Fr Siarhei in memory Slucak heroes. It will be followed by a report of the Deputy Chairman of the Association of Belarusian in Britain Mikalaj Packajeu and a screening of a 30-minutes film on the Slucak Armed Campaign and. A modest reception will conclude the event. The entry is free.

On Sunday, 25 November at 10:30 am, a memorial service for all the heroes who gave their lives

for their Homeland Belarus will take place at the Church of St Peter and Paul at   39 Holden Road, London, N12 8HS (Woodside Park station on the Northern line).

This entry was posted in ABS and tagged belarusians in britain, slucak, zbvb. Bookmark the permalink.