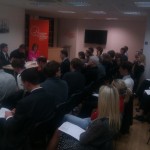 On 23 October the European Council on Foreign Relations and the Anglo-Belarusian Society in London organised an event ‘Belarus After Elections: Three Years of Stability?’

The buy cialis online main speakers were Katia Glad from Chatham House and Yauheni Preiherman of the Liberal Club in Minsk who is also a regular contributor to Belarus Digest. Andrew Wilson, Senior Policy Fellow at the European Council on Foreign Relations, moderated the discussion.

The participants focused primarily on the post-election situation of Belarus. They also considered possible scenarios for future developments in the country anf the role of the Belarusian opposition. Other

topics included current trends in politics and economy as well as the possible role of the pro-government organisation Belaya Rus which officially won majority in the recent elections.